In Part 1 of our blog series we discussed the different types of deep foundations and some of what goes into their design. Once a deep foundation system is selected and load requirements are determined, the process of constructing them begins. In this post, we will focus on quality control and integrity testing related to deep foundations.

Observations have been a part of deep foundation quality programs for as long as deep foundations have been around. In many cases, they provide some of the most useful information to the design team in evaluating the abilities of individual deep foundation elements to meet the design requirements. Unfortunately, observations often do not explain why something occurred, but only give the result, such as a high grout-take for a portion of an auger-cast pile, or a driven pile having a sudden decrease in penetration resistance. Hopefully, the geotechnical engineer has gathered enough information from the design or even the construction phase of the project to interpret the observation results in a meaningful manner.

Specific observations during construction of a deep foundation system vary depending on the system. In general, observations include the installed depth/elevation relative to design depth/elevation, resistance to driving or drilling, and the measure of how plumb the pile top is. For drilled foundations, the amount of concrete or grout placed relative to the amount of drilled material is also observed in addition to testing the grout or concrete for consistency and strength. The bottom of a drilled shaft may be observed to document that the toe will bear in sound material. 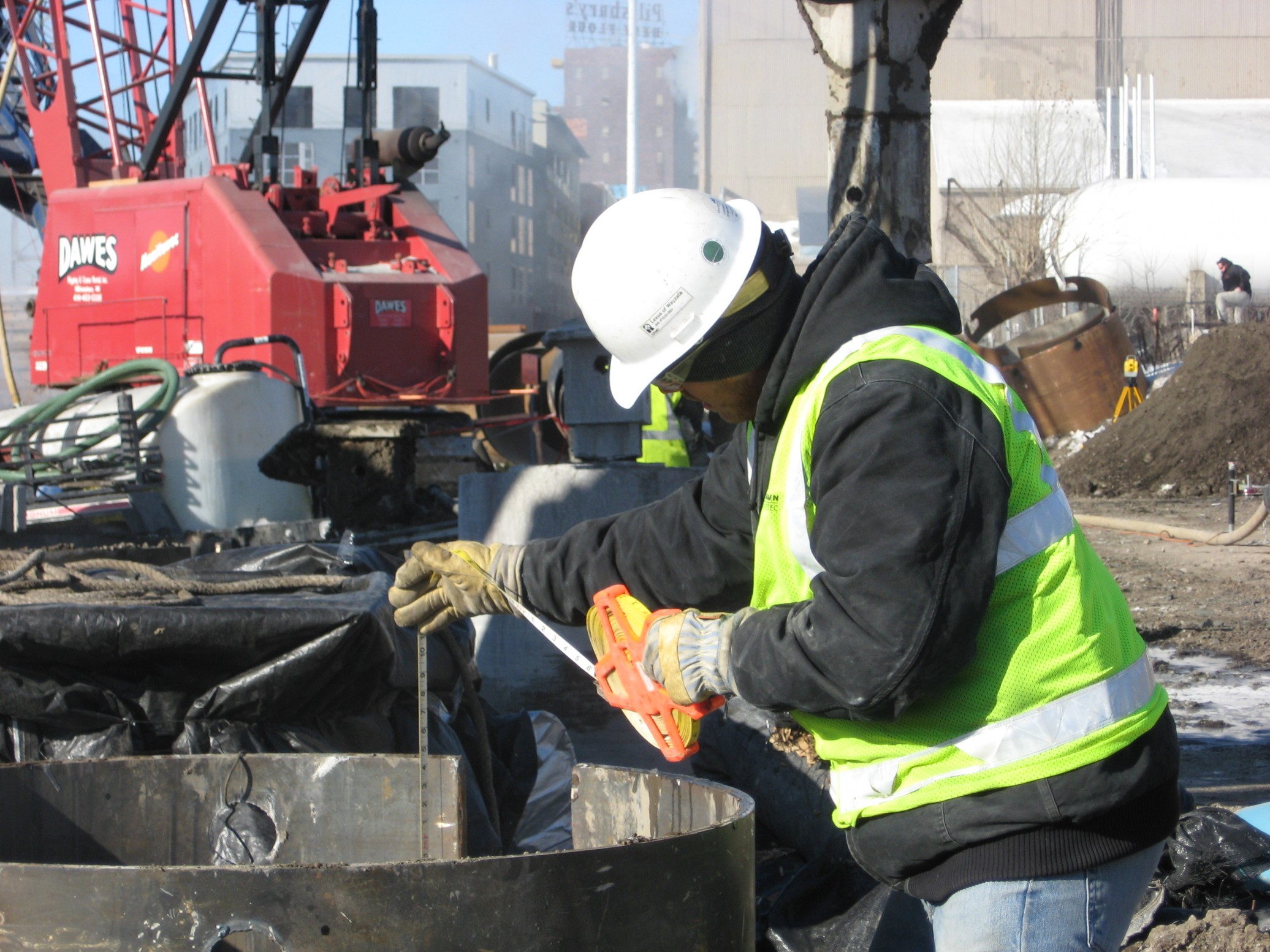 Similarly, a driven pipe pile will usually be observed for indications of damage, sweeping and/or water. With recent advances in technology, most observations are supplemented by electronic recording equipment that can count the number of blows for a driven foundation, record the depth, grout volume and pressure for auger-cast piles, and many other pieces of data. However, computers cannot yet record every detail of construction. Thus, there is a need for a human observer during the installation of deep foundations.

Due to the associated costs, load tests are often performed only on test piles, but may also occasionally be performed on production piles. Some load tests are destructive. A destructive load test is a test that can damage the deep foundation, or significantly alter the soils or rock supporting the deep foundation. In either case, the test pile may not be able to perform as designed after the test, and such test piles are sacrificed and not incorporated into the foundation system supporting the structure.

For a static load test where the load is applied to the top, some form of reaction system (typically piles connected by beams) is required to apply the load. The main beam is centered over the test pile and a hydraulic jack and load cell are placed between the beam and the top of the pile. The pile top is instrumented to measure deflections so the ultimate load-carrying capacity of the deep foundation can be evaluated. Application of the load at the bottom of the pile most commonly uses an Osterberg Cell (O-cell) that is similar to a hydraulic jack and contains instrumentation for measuring O-cell expansion and strains. 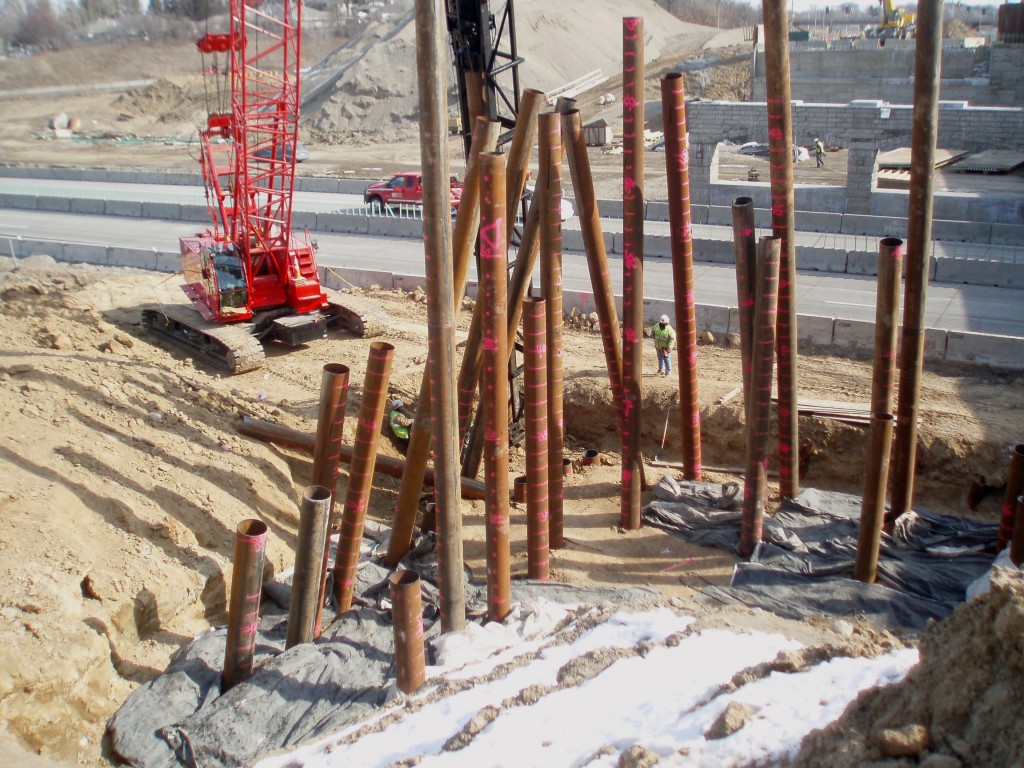 Dynamic load tests consist of an impact load usually applied by a drop weight or power-driven hammer, like a diesel hammer used to install driven piles. They can also use a mass and an explosion to create a force-pulse in what is often referred to as a quasi-static load test. Most often, dynamic tests are referred to by the test equipment – PDA (Pile Driving Analyzer) for a high-strain, fully-dynamic test, or Statnamic, for a high-strain, quasi-static load test. Both types of testing require numerical methods to determine the overall deep foundation resistance and the resistance provided by different pile segments and the pile toe.

From a geotechnical engineering perspective, performing a load test to failure using instrumentation is most useful. This approach allows us to obtain the most information from the load test and can result in reducing the overall deep foundation length either by lowering the safety factor (or increasing the resistance factor for LRFD methodology), or by using higher shaft resistance values or end bearing resistance values.

Of course, there is always the possibility that a load test will indicate that certain soil or rock layers do not provide as much resistance as estimated during design of the deep foundation system. Usually with a conservative design this does not happen, but it can occur. When resistance is under-estimated, having instrumentation along the deep foundation length allows for the use of the actual resistance values for a revised design. The downside of performing a load test is that it often requires a robust (i.e., expensive) reaction system for a load applied to the top of the foundation, and the sacrifice of equipment needed to apply a load to the bottom of the foundation (which can also be expensive). There is also difficulty defining failure and the different criteria methods to do so. We might need a Part III to discuss that topic! Low-strain integrity tests are performed by attaching an accelerometer to the top of a deep foundation and hitting the top with a lightweight (1- to 8-pound) hammer with a special cap. The cap on the hammer lengthens the impact pulse so that it is suitable for integrity testing. The accelerometer then measures the pile response to the induced stress wave. A good test will show a clear toe reflection at the anticipated length.

However, numerous factors can influence the quality of the test and the results. These factors include soil resistance, material properties (strength, density, etc.), reinforcement within the deep foundation, and the length of the deep foundation. As a general rule of thumb, integrity testing is practical for deep foundations with a length that is about 30 times its diameter, (e.g., we can reliably test a 1-foot diameter deep foundation to a length of about 30 feet) although Braun Intertec team members have successfully performed tests on deep foundation lengths up to 60 times the diameter on multiple occasions.

Experience, the wonderful teacher that it is, has repeatedly taught us that a successful project starts with planning and design and ends with a good, quality program. The only “real way” we can know what a contractor builds below the ground is to exhume it, which defeats the purpose of putting it there to begin with. A comprehensive program that includes detailed observations, load tests and applicable integrity tests, can provide us with enough information to apply our engineering judgment on the overall ability of the deep foundation system to meet project requirements.

Understanding the performance and remaining service life of facility assets can be challenging. This is especially true if you own multiple buildings or facilities across different geographies. Knowing a building’s assets can provide a benchmark to optimize life cycle costs and improve reliability of facility assets across an organization’s entire portfolio. By establishing a roof asset management program, information pertaining to facilities components, such as roofs, enables owners to make better decisions and more complete budget forecasts with greater accuracy around decisions for repair or replacement/capital expenditures. One of the most important parts of an asset management program is turning...

We recently met with Ken LeBlanc, NDE operations manager, from our La Porte, Texas office to learn about his professional background, expertise in nondestructive testing and what he likes best about being a Braun Intertec employee-owner. Tell us about your background I actually went to school to become a professional journalist but what eventually led me to nondestructive testing (NDT) was my concern for where I lived. When I was younger, I saw how material and process failures caused risks to life, property and futures. I felt a more noble career path would be to work on a team that...