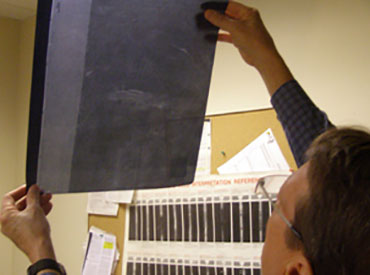 On behalf of the South Dakota Art Museum at South Dakota State University in Brookings, the Midwest Art Conservation Center brought a Harvey Dunn painting to Braun Intertec. Dunn was an American illustrator from South Dakota whose work appeared in The Saturday Evening Post, Harper’s and a number of other publications during the early part of the 20th century. Like many artists of his time, Dunn reused canvases by painting over previous works of art.

Curators suspected that the painting, which featured a Vaudeville actor in a retirement home, may have been painted on top of another image. They hoped an x-ray might reveal an underlying image, as paint from that period usually contained lead, which would be detectable by x-ray. To not miss a section of the painting due to its size, the entire portrait was x-rayed in one exposure with smaller pieces of overlapping film placed underneath. Using very low kilovolt and milliamp settings, and a long x-ray tube-to-film distance, the film was allowed to expose for about 30 minutes.

The resulting film picked up an image of men on a boat. The Midwest Art Conservation Center was then able to digitize the x-ray films and stitch them together to make a seamless composite, allowing The South Dakota Art Museum to research and identify the newfound image.