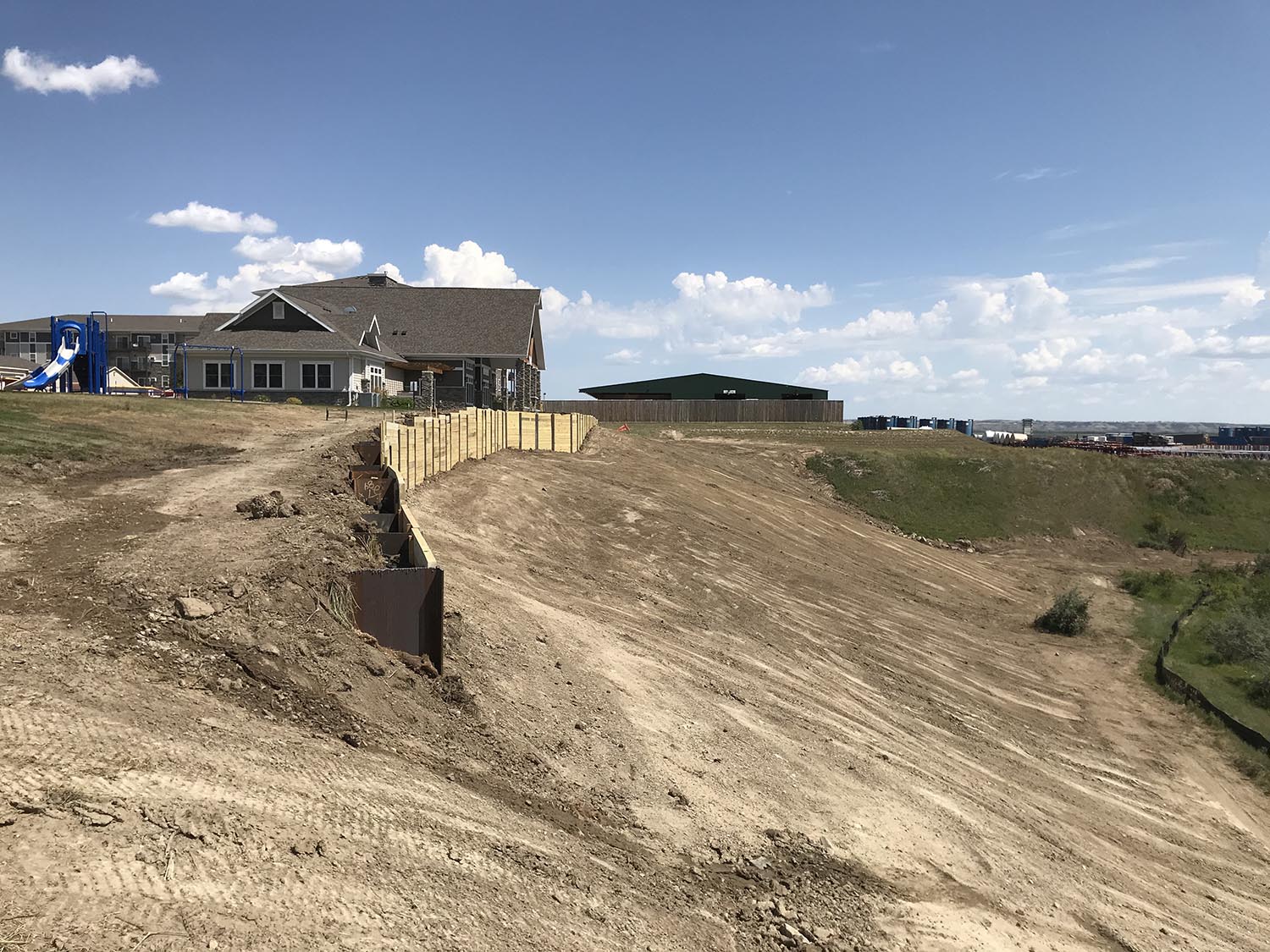 The South Ridge apartment complex in Williston, North Dakota originally contacted Braun Intertec to evaluate the distress observed in the patio area of the clubhouse, which included exterior cracking in the façade of the building and the edge of the patio area settling and failing into a slope with a water feature at the bottom. As a result of both observations, the property owners wanted more insight into what was going on with their structure.

Understanding the dynamics of the landscape

Initially, Braun Intertec performed soil borings and aerial topography to understand the dynamics of the landscape and the soils placed there. Based on the initial Braun Intertec evaluation, we concluded the clubhouse was likely built over an old slough and suspected the ground was not prepared by removing soft, organic soil before filling or that the fill was not well compacted—or both. Once those factors were understood and the danger of their building becoming unstable and unsafe to enter continued to escalate, Braun Intertec was contracted to design a retaining wall system that would preserve the clubhouse and repair the settling soils.

In the midst of this project plan development, a landslide took place over the winter bringing the failing soils within two feet of the clubhouse structure, highlighting the urgency of action. Braun Intertec developed a soldier pile and lagging retaining wall system that would help restore approximately 10 feet of the outdoor patio area that had been lost to landslide. It would also reinforce the soils so that while the landslide could continue failing on the outer side of the retaining wall, no additional soils would be lost on the clubhouse side of the retaining wall, protecting the clubhouse structure from further damage and maintaining its usefulness for South Ridge apartment residents.

The initial Braun Intertec measurements indicated the landslide was at least 150 feet long, occurred on the south side of the clubhouse, and that there was about eight feet of vertical offset apparent. At some point between initial conversations with the client and the development of our soldier pile and lagging retaining wall system, another external party underpinned the clubhouse patio with helical piles which did not resolve the distress to the building or mitigate the landslide movement.

Our focus on this project was protecting the building and ground from the landslide. The construction sequence for this solution was to excavate the drilled shaft, install the steel beam, and then backfill the excavation with concrete to the cutoff elevation at the existing ground surface. After the lagging boards were installed, the wall was backfilled with engineered fill to the top of the wall.

In total, Braun Intertec performed the following geotechnical services for this project:

As a result of Braun Intertec being focused on protecting the building and ground from the progressing landslide, we recommended the soldier pile wall be installed along the alignment necessary to restore a 10-foot-wide yard near the patio, but as close to the existing scarp further to the west to reduce the retained height. To visualize the geometry of the existing landslide and the full scope of the soils that were in danger of failing if left unaddressed, Braun Intertec ran a global stability analysis to visualize the degree to which the building was in fact in jeopardy.

Braun Intertec also ran a global stability analysis which visualized how soldier piles would protect the land around the clubhouse. While this solution would not stop all the land sliding into the water feature below, it would stop the soil from failing around the clubhouse and enable the clubhouse building to remain in operation for its residents. Ultimately, Braun Intertec was contracted to develop a soldier pile retaining wall with lagging boards on the front face and backfill behind the piles.

To prevent future soil sloughing, Braun Intertec designed a concrete rigid inclusion behind the lagging at areas where the proximity to the building prevented the lagging to be installed below the anticipated minimum exposed elevation. With this concrete solution, even if the lagging was undermined in the future, the concrete behind the piles adjacent to the clubhouse would catch everything. This concrete backup system was not necessary for all the solider piles. They were only used in locations nearest to the clubhouse where our engineers wanted to avoid undermining the clubhouse footings. Further away from the clubhouse, the lagging boards were able to be dug in deeper, avoiding the need for the backup concrete solution.

Creativity was essential to this project when it came to developing a solution that was extremely close to an already unstable structure. Typically the lagging boards on a soldier pile wall are installed individually from the top down during construction. This process often creates a small amount of soil sloughing and some settlement of the surface soils adjacent to the piles. Because Braun Intertec was working so close to the clubhouse structure, we didn’t want to install our lagging boards in a way that would undermine the building’s footings.

We decided we must drill concrete rigid inclusions behind the lagging boards to prevent sloughing during installation and would further prevent future sloughing under the lagging boards in the event the landslide was to remobilize. This was not necessary for the piles far enough away from the structure. Those were handled conventionally by simply digging deeper to install the lagging boards below grade and did not require the addition of concrete to capture soil that might slide in the future. The key to this solution was the combined implementation of standard soldier piles with the creative addition of concrete to protect the building.

A secondary aspect of this project which also required creativity was sorting out site access. Access to the project site was very tight and because they were working on a slope, it required the contractors to come in from the side and dig out a bench to work from while not overloading the slope which still had settling soils present. Once the contractors had finished working from the bench they created, it was backfilled at the completion of the project.

Retaining wall design: Stop the landslide or simply stabilize the structure and soils?

From the design perspective, designing the retaining wall solution was complex because there were two ways to look at what we were doing—do we try to stop the landslide entirely or do we simply try to stabilize the building and the surrounding soils but let the rest of the slope continue to settle once we have secured the structure. Our solution was to stabilize the structure and surrounding soils.

Frequently, the more common practice during a landslide is to place piles to protect the land slide from continuing to move down the slope but in this case, we are not doing that. In fact, we are letting the landslide reach its natural equilibrium. Our new soldier pile wall is primarily holding up the clubhouse structure. With that strategy in mind, we completed an analysis to figure out what is the reasonable depth of the landslide, i.e. how far down is the land going to move? Based on that analysis, Braun Intertec was able to determine how to design the depths of the soldier piles.

Interested in learning more about retention walls?
Click the button below to sign-up for our webinar: “Introduction to Retention Walls: Select the Right System For Your Next Project”