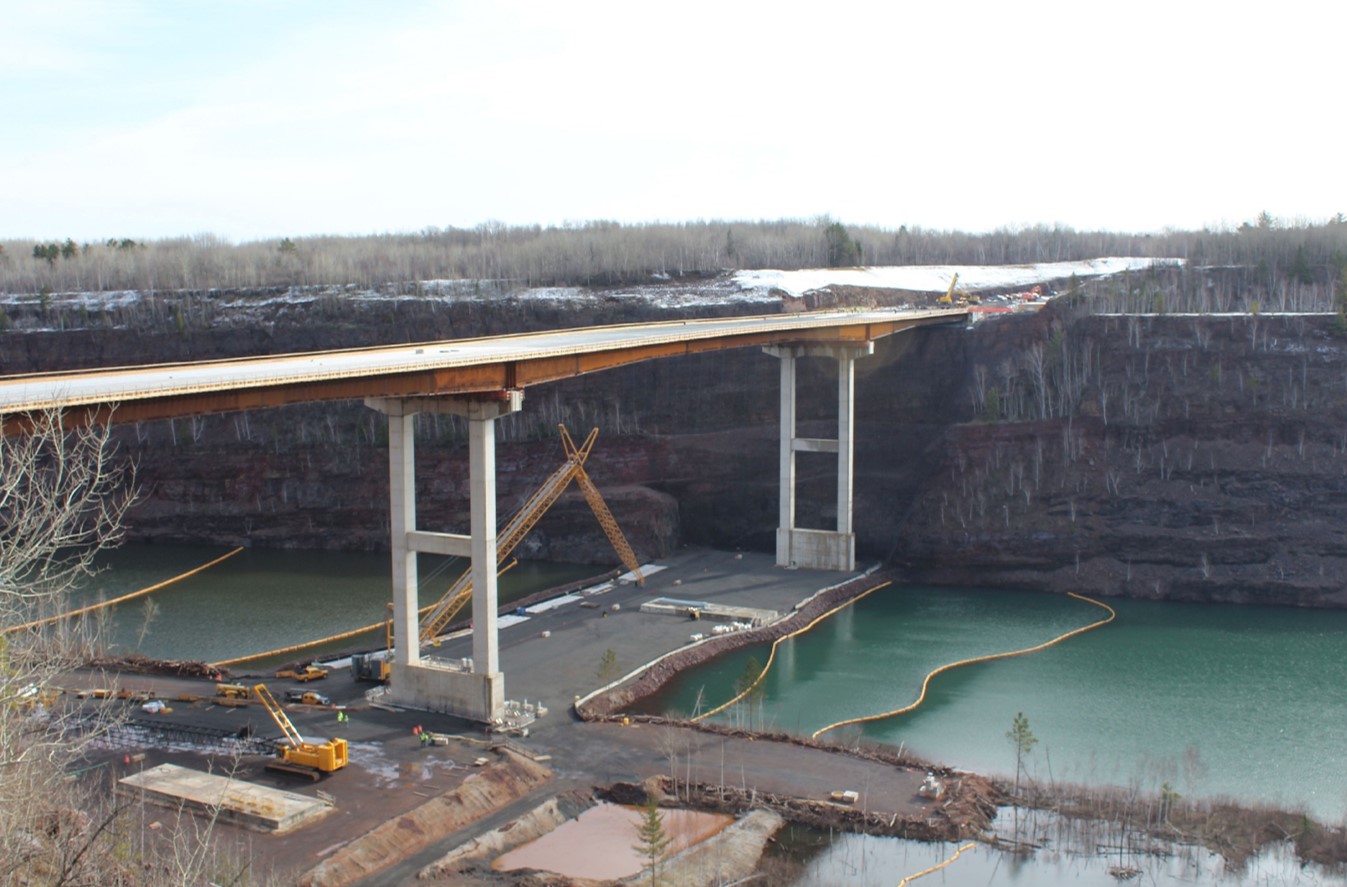 Trunk highway 53 (TH 53), located south of Virginia, Minnesota, was built in 1960 on land owned by iron mining interests. In 2010, these mining interests notified MnDOT that a portion of the roadway in Virginia would need to be relocated to provide access to valuable natural resources. The new alignment would require the construction of a 1,100-foot bridge across the massive Rouchleau Pit, an abandoned open-pit mine. Open since September 2017, the bridge is the tallest in Minnesota.

The significant height requirements for the bridge created challenges for construction and a causeway was needed to provide access for construction activities at the base of the bridge. Braun Intertec was retained to design a temporary rock causeway to support varied surface loading from construction equipment and shoring towers, as well as the Terex CC 6800 heavy-lift crawler crane which lifted bridge girders some 200 feet in the air to construct the TH 53 Bridge which crosses the Rouchleau Pit.

Causeway Design and Construction
In general, causeways are constructed across small creeks and streams and are of minimal depth however, the Rouchleau Pit is a massive open-pit mine, and required a temporary causeway measuring approximately 500 feet across. The completed causeway varies in depth up to 110 feet, with five feet exposed above the waterline. The size, scale and depth of this causeway pushed the boundaries of causeway design and construction. 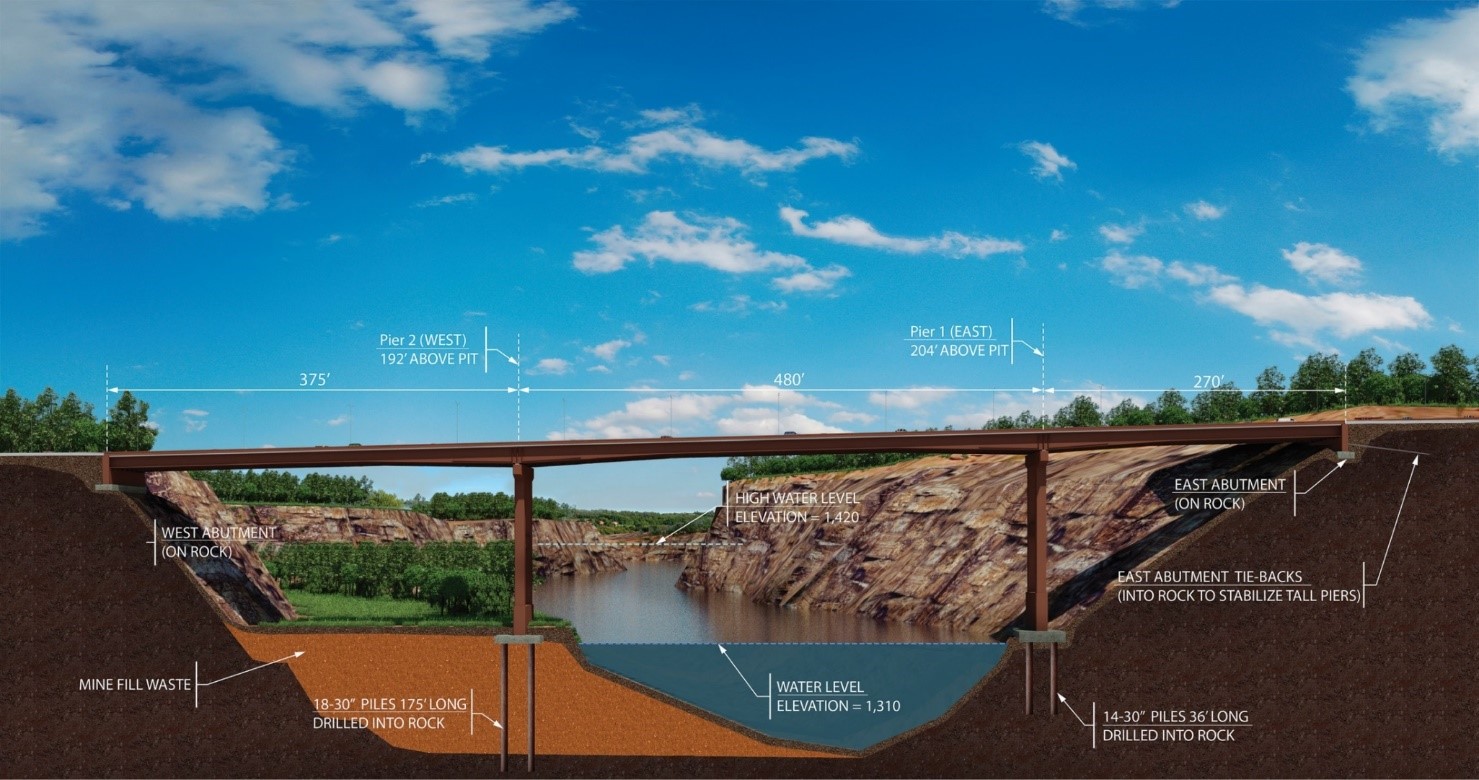 The design and construction of the causeway required several innovative measures, which included:

The mine-blasted rock which was used as fill in the causeway construction was very angular, which made determining the slope geometry of the causeway difficult. Kiewit, the general contractor for this project, surveyed the rock pit using an Echo Sounder C4 Hydro Lite System, with a transducer set into holes drilled through the ice, on a 25-foot grid and took readings to verify the depths and slope geometry. A topographical survey, obtained with the Echo Sounder C4 Hydro Lite System, was created. Using the survey as a tool, additional rock was placed in areas to achieve design slopes. 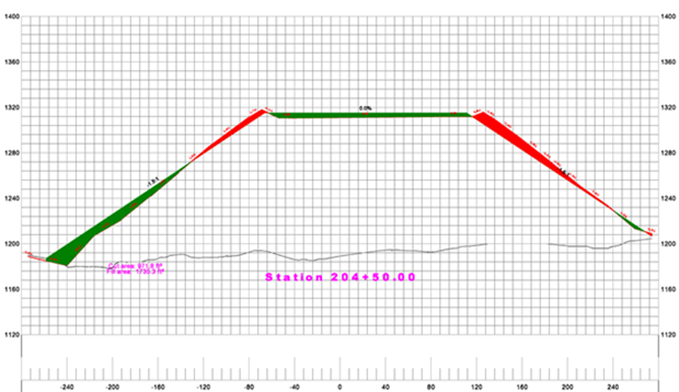 Loads anticipated from surface loading ranged from 2600psf to 7500psf, with the largest loading coming from the crane performing bridge construction. To accommodate this significant surface weight, the project team proposed a causeway design comprised of four zones. Due to the varying depths present in the Rouchleau Pit, the design needed to account for strength changes resulting from rocks at lower elevations crushing from the weight of rocks above. To reduce the required thickness of the rocks at the surface of the causeway, the team implemented a Tensar BX1200, polypropylene bi-axial geogrid, which provided a safe and stable surface to perform construction activities.

Project Challenges
The location, scope, and sheer size of the causeway posed many challenges to the project team members. One challenge the project team faced was creating a causeway that was wide enough to provide a safe and stable surface for construction activities, while also meeting the budget requirements. Because of these requirements, the causeway design needed to address many complexities, such as varied surface loading of heavy construction equipment and shoring towers, which included the enormous Terex CC 6800 heavy-lift crawler crane used to lift bridge girders.

The depth of the causeway posed many complex challenges of its own. Quarried iron ore rock was used for construction, which was very dense, angular and rough. Because of the varying depths present in the Rouchleau Pit, the causeway design needed to account for strength changes that resulted from rocks at lower elevations crushing from the weight of rocks above. The causeway slopes were designed using Slope/W, a design software up to the challenge of modeling varying strength properties. Braun Intertec also used Plaxis, a finite element program to model stress distributions under varying load conditions. 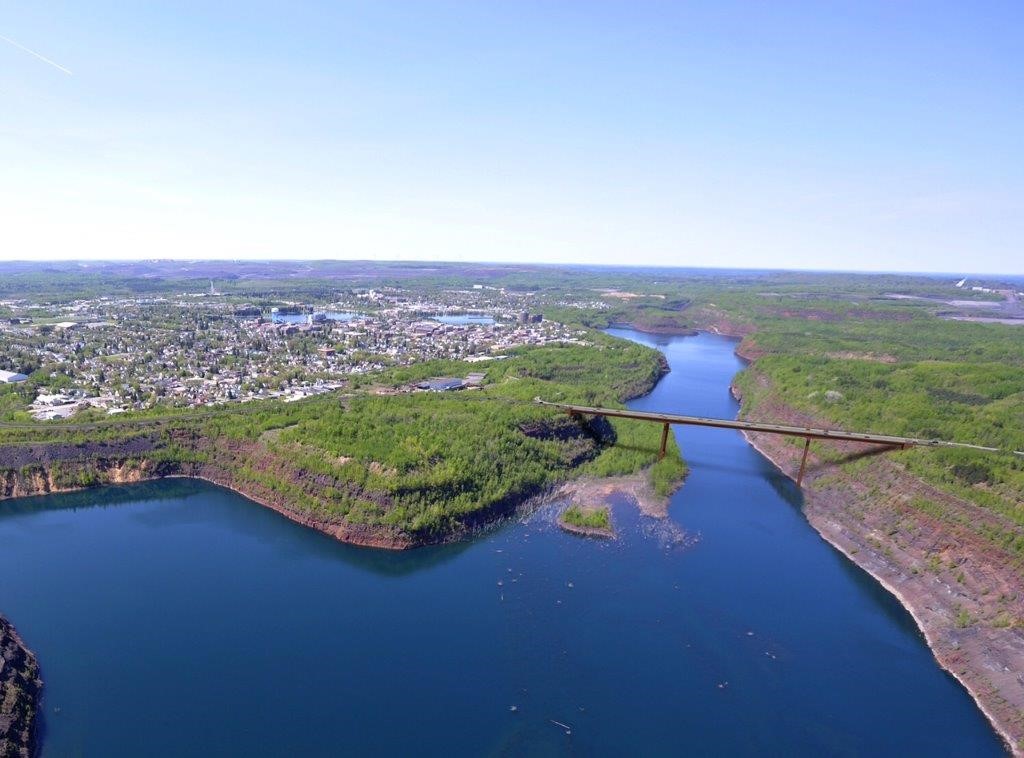 Of the four zones designed for this causeway, construction of the underwater Zone 4 was performed by skilled equipment operators. The construction process consisted of off-road haul truck drivers dumping material at the causeway site, which was then pushed into the Rouchleau Pit water by a large bulldozer. The materials used in Zones 3 and 4 of the causeway was quarried iron ore rock obtained from a nearby borrow area. An advantage to using the rock from the borrow area was that it was in close vicinity to the project site, with a less than 15-minute round trip to unload and load. The off-road haul trucks transported approximately 325,000 cubic yards of rock, which is roughly 180,055 truckloads. 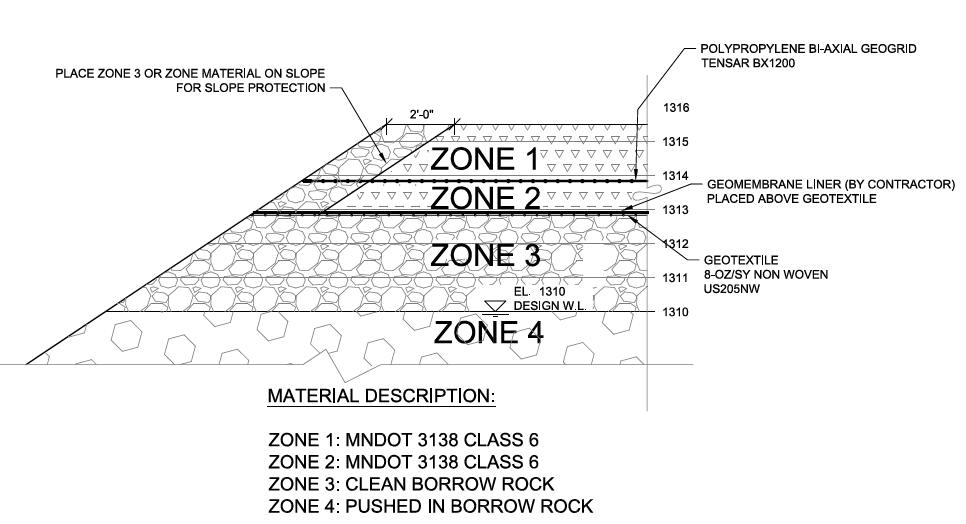 Want to learn more about solutions for varied surface loading of heavy construction equipment?
Sign up for our webinar “Crane Pad Design: Small Details That Can Make Or Break Your Project” where you can learn about the complexities of designing a safe crane pad whatever the terrain; common crane pad design questions; and case studies of crane pad designs gone wrong.