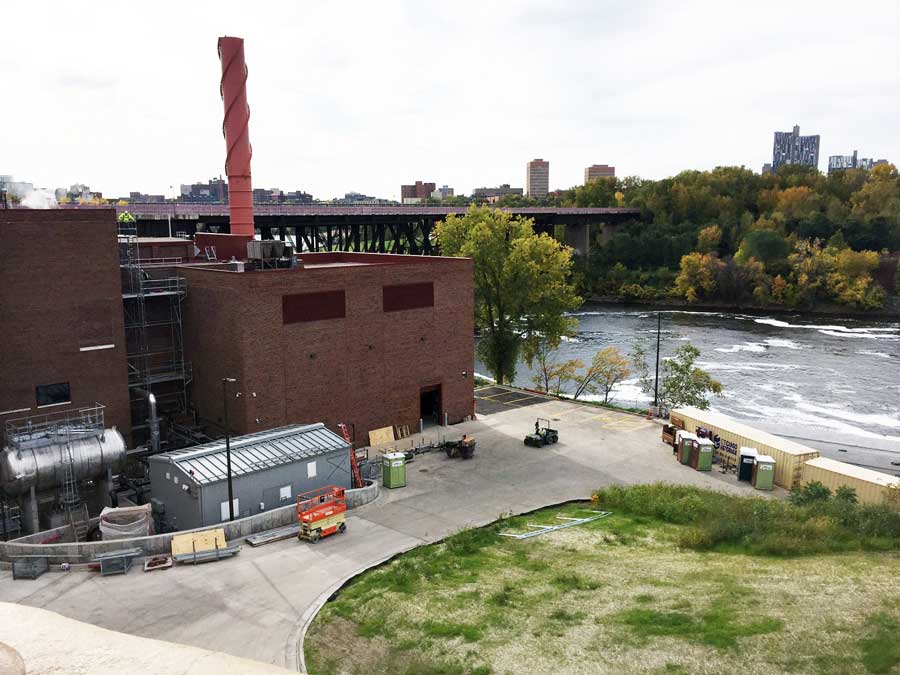 In 2012 the University of Minnesota decided to resurrect the Old Main Heating Plant, a steam generating plant constructed in 1912 on the site of a former limestone quarry on the banks of the Mississippi River, into something new and innovative. Over its decades of use, the facility had undergone several renovations to address the growth of the university. However, the Old Main Heating Plant’s latest iteration would be the most impressive: retrofitting an outdated steam plant that once used seven coal and gas-fired boilers to generate steam into an efficient, state-of-the-art, combined heat and power plant. With the installation of a jet engine-driven turbine and a massive heat recovery system, the Main Energy Plant would address the University of Minnesota’s increased demand for power and steam and help the university progress toward its goal of reducing campus emissions by 50 percent by 2020.

To embark on this energy-efficient expedition, the university first needed to address the hazardous materials inside the main building, the adjoining decommissioned incinerator building and pump houses, and the impacted soils throughout the site. Braun Intertec was retained by the University of Minnesota to help with the assessment of hazardous materials and abatement of the Old Main facility, including the incinerator building. Outside, Braun Intertec worked with the university to prepare the environmental response action plan/construction contingency plan to address the known and unknown impacts throughout the site.

Ultimately, the overall environmental remediation project removed asbestos-containing thermal insulation from the seven boilers and their associated piping; recovered over 500 pounds of liquid mercury from the antiquated heating equipment control panels and other instruments; removed nearly 10,000 square feet of mercury-catalyzed polyurethane flooring; removed lead paint; demolished the former incinerator facility which also contained ash from burned medical waste; demolished two former pump house buildings which also required the recovery of a large volume of fuel oil and landfilled thousands of tons of impacted soils as the site was regraded to support a new access road. Throughout the site grading effort, Braun Intertec was retained to provide the full-time observations as the impacted soils were remediated and other environmental impacts were addressed.

Before construction of the Main Energy Plant and installation of the new co-generation systems could begin, the university and its design team needed to better understand the site’s soil and groundwater conditions. As the geotechnical engineer for the project, Braun Intertec undertook an extensive historic review of the past evaluations on the site. This review resulted in the development of a final geotechnical program to address the support of new features inside the combined heat and power plant as well as construction of the new access road, which replaced a difficult to navigate switchback drive and the massive retaining wall that would support the limestone and soil bluff created by the Mississippi River and the quarry. Inside the building, the evaluation showed that a combination of high-capacity spread footings could be used where the sandstone bedrock was shallow and deep micropiles were needed where the old river channel was found.

Once the geotechnical review was complete, the project advanced to the renovation of the Old Main facility. One of the many challenges that surfaced during this project was concern that the 1910 era structural steel may not be weldable as new structural steel was added to the plant. Fortunately, Braun Intertec had just finished working with similar era structural steel on the University of Minnesota’s Northrop Auditorium renovation project, another historically significant structure on campus. Braun Intertec ultimately implemented a testing program with the knowledge gleaned from the Northrop Auditorium project to address the welding concern. This testing program found the chemical makeup of the old structural steel was not compatible with modern-day welding techniques. If exposed to welding heat, the old steel would become brittle and lose its load carrying capacity.  In order to maintain the structural integrity of the Old Main building, our engineers worked with the design team to develop a modern-day plate bolted to the old steel detail to allow new structural steel to be added to the interior.

Another challenge Braun Intertec and the construction team faced was the mystery of how the rear wall of the building was poured against the face of the old quarry in 1911. Braun Intertec used concrete coring equipment to core through the concrete walls, which turned out to be up to four-feet thick. Often, a void was found behind the wall. A small camera was inserted into the core hole to videotape the condition of the void and the back of the wall before it was resealed for another 100 years or so.

Keeping It Up to Code: Special Inspections and Testing

Completed in 2017, the Main Energy Plant is expected to double the energy efficiency output of the old plant, saving the University of Minnesota an estimated $2 million in operating costs each year. The combined heat and power plant will also reduce carbon emissions by an estimated 10 to 13 percent, helping the university achieve its sustainability goals.