In the Field: Tunneling the River des Peres project

In St. Louis, Missouri, we deal with a lot of water. It’s on the state flag and seal – heck, not even our landmarks can escape it, with Gateway Arch sitting right at the shore of the Mississippi River. So what do we do with all that water? Certainly on our most seasonal days, it feels like all we do is drown in it, but what really happens with all that rainwater and river water that we accumulate over the weeks?

In 2012, the Metropolitan St. Louis Sewer District (MSD) sought to improve upon the solutions to that very problem. Project Clear was designed to invest billions of dollars in planning, designing, and building rainscaping and other water-system improvements in our local communities. Among other things, this program will reduce the occurrence of sewage overflows that result from older wastewater collection systems not being up to task – and I for one relish the thought of sewage staying underground and away from all of us! 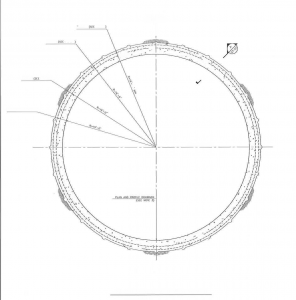 The MSD divided Project Clear into subprojects that will be designed and implemented over time. Arguably the most interesting of these is the Lower & Middle River des Peres (RDP) tunnel project. This tunnel will address the aging sewage collection system in South St. Louis City and adjacent areas in that region.

The River des Peres is not without construction history. The river was channelized for the World’s Fair in 1904, and again revisited in the 1920s after a series of floods called for a different solution to river overflow. From 1924 to 1933, the U.S. Army Corps of Engineers worked to redirect the upper portion of the river underground – no small feat, and the project was declared an Engineering Landmark by the American Society for Civil Engineers in 1988.

But we’re not quite done with this old river. St. Louis faces a unique problem during heavy rains: overflow from stormwater and sewage. The current underground sewage infrastructure can’t handle the combined rush of water that comes from heavy rains or potential flooding upriver. St. Louis has outgrown the capacity that was originally designed for runoff and sewage. The solution? Build a bigger tunnel…much, much bigger. 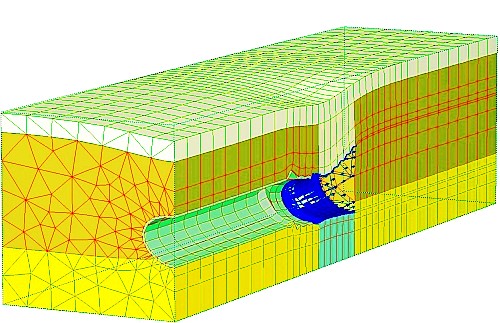 Nine miles long and 32 feet in diameter – that’s enough space to fit 150 football fields end-to-end! Certainly enough to take care of any potential flooding and overflow from the current system. At a depth of 200 to 250 feet, as much as 300 million gallons of water will flow safely away from the city streets. This tunnel will act as storage for the wet-weather flows that cause so many problems. A large excavating machine, known as a tunnel-boring machine (TBM) will be the main instrument used in construction activities. These machines are as big as the tunnel they excavate, and can excavate up to a mile a day! Yowza! The machine used in this project is a record-breaker itself: 250 feet long and 32 feet in diameter. That’s about four freight-train engines stacked on top of each other.

Braun Intertec reviewed the tunnel design and instrumentation plans including: the subsurface information and geotechnical design calculations, geotechnical concerns regarding the zones of stress influence and ground disturbance, track monitoring needs and impact to existing BNSF bridges, and a pedestrian underpass and railroad crossings. For more information about our tunneling services, contact us at 855.995.4669.

Building enclosures are more complex and less forgiving than ever before. From assembly in the field under any weather condition to tradespeople who report to different contractors assembling the structure with minimal oversight, the list of variables that accompanies the construction of a structure is lengthy. When it’s all said and done, how can you verify the finished structure, enclosure systems and the systems’ installation will meet the project requirements? Watch as our building enclosure commissioning expert, Andre Lehr from our Houston, Texas office, dives into building enclosure commissioning and what architects, contractors and project managers should keep in mind...

Who We Are Home to approximately 25 geotechnical engineers and construction materials testing consultants in Arlington, Texas, our local team members offer a wide range of services to our clients. Arlington’s primary service categories include: Geotechnical engineering Construction materials testing Nondestructive testing Unmanned aerial systems Cone penetration testing Environmental consulting Drilling Currently, our Arlington office’s largest and most high-profile project is the new Texas Rangers Stadium, for which we are proud to provide construction materials testing and structural steel inspections. In addition, Arlington’s talented team has also worked on projects for the University of North Texas, City of Rockville, Fort...